We have been working hard over the last couple of years or so to reproduce the mash bill of a once top shelf Bourbon.  We believe we finally have it down! The next step was to see how close our little pot stills could get to replicating the distillate which originally flowed from a 48 foot tall, 7 foot in diameter stainless steel continuous column still.  The “white dog”, “new make” or “entry” as the distillate was called in various operations seems to be darn close to the gold standard we were aiming to duplicate.  If the “entry”, as it was called here at the old distillery is good, the barrel will only make it better!  The wait over! Come join us taste our newest Bourbon! We have coined it ¡Cuervito Vivo!™

¡Cuervito Vivo!™ is our newest Bourbon. It is another single barrel nano batch Bourbon. Our vision for this Bourbon was to recreate the top shelf Bourbon once produced on the grounds we operate on today.  We had the benefit of the insight of the last supervisor to manage this distillery. His nose has been the guiding light so to speak for the rebirth of this once mighty Bourbon. Our thanks go out to Bob for his friendship, and enthusiasm for great high quality no nonsense Bourbon.

When David Meier, the owner of Glenns Creek Distillery started out on this adventure of distilling, he intended to make great, hand-crafted bourbon that would honor the spirit of Dr. James Crow. He did not expect that he would be using yeast resurrected from one of the fermentation tanks at the old distillery, but in retrospect it makes perfect sense as people have been reviving yeast for thousands of years.

David knew that he wanted to create a truly unique bourbon, but like many great creations of the past, OCD #5 is a combination of ideas from all the people who have helped revive the old distillery. We did a lot of experiments and in the end combined several good ideas to create a bourbon unlike anything else on the market.

OCD #5 is made completely on site from cooking to bottling, and distilled using our custom pot stills. Our maturation process is more labor intensive, but we think it is worth the extra effort. Our aging process is designed to make the flavours as soft as they are pronounced, leading to a smooth and enjoyable experience. This is our most popular bourbon and the staff favourite. We are sure the you will find this to be a bourbon unlike any other!

Stave + Barrel™ is a 21% rye bourbon sourced from MGP in Indiana and aged to perfection here at Glenns Creek Distilling. By bottling time this is a bourbon that provides tastes of oak, vanilla, soft spices, dark chocolate, and a smooth caramel finish. It is a bit more “traditional” in flavor than the bourbons we distill, so if you like a more familiar flavor this one might be for you.

Ryskey™ Rye Whiskey is a 95% rye whiskey sourced from MGP in Indiana. It is the same rye found in many much more expensive brands. We have decided to focus our distilling on bourbon so sourcing this rye from a very well known distillery was an easy decision. It tastes great and we could not compete with the price point.

Captain S’asha Amelia Bonny began her sea faring career in the Swiss-Romanian navy under the tutelage of Captain Boroslav Aleksander S’otit, who, unbeknownst to either of them was her half-brother. We start with a quality molasses base, distill it out of our custom pot stills, and then finish it by aging it in our old bourbon barrels. This gives it that familiar “Kentucky hug” of bourbon, but with all the sweet citrus notes of a high-quality rum. It’s not often you encounter a rum at barrel strength that is full of flavour and smooth enough to drink straight, but that is what we strive for. We are at the dawn of a new age for rum, and we are happy to be pioneering new flavours for rum drinkers to enjoy.

Hamilton Smoke™ is a specialty spirit made from grain and cane. It is a spin-off of the OCD #5™ bourbon grain bill with the addition of sugar and smoke peated Barley for fermentation. The result is a product that is a bit more mild than bourbon with a nice smoke taste of a lightly peated Malt Whiskey.

Hamilton Dark™ is a specialty spirit made from grain and cane. It is a spin-off of the Café Olé™ bourbon grain bill with the addition of sugar for fermentation. The result is a product that is a bit more mild than bourbon with a nice sweet-fruity taste.

Millville Malt™, a malt whiskey, bottled at barrel strength, single barrel pot distilled with a light hint of peat.  We named this creation in honor of the community which has been the home of great distilleries for almost 2 centuries! We are proud members of the Millville community and represent the values which make this region unique.

Café Olé™ is a bourbon with a very unique flavor profile. It is the same mash bill as our OCD #5™ bourbon with an addition of a heavily toasted barley malt. It has hints of chocolate and coffee with a long lingering finish.

S’OTIT Special Family Reserve Vodka distilled from grains, 100 proof and as close to tasteless as we could craft it!

S’otit Vodka is a centuries old recipe, first distilled by Commodore Boraslav Aleksander S’otit of the Swiss-Romanian Navy. Commodore S’otit wanted a near tasteless alcoholic beverage for his sailors to replace more expensive rum and limit the dependence on water – which tended to go bad on long voyages.

S’otit Vodka was first distilled in Romanian copper and gold stills, hand crafted by the Commodore himself. Glenns Creek Distillery was entrusted to make the pure, nearly tasteless distilled spirit because the family felt that it must be made by truly tasteless distillers. We fit that description and wear the title with pride.

*REMEMBER that being tasteless doesn’t mean being classless so enjoy S’otit Vodka responsibly. 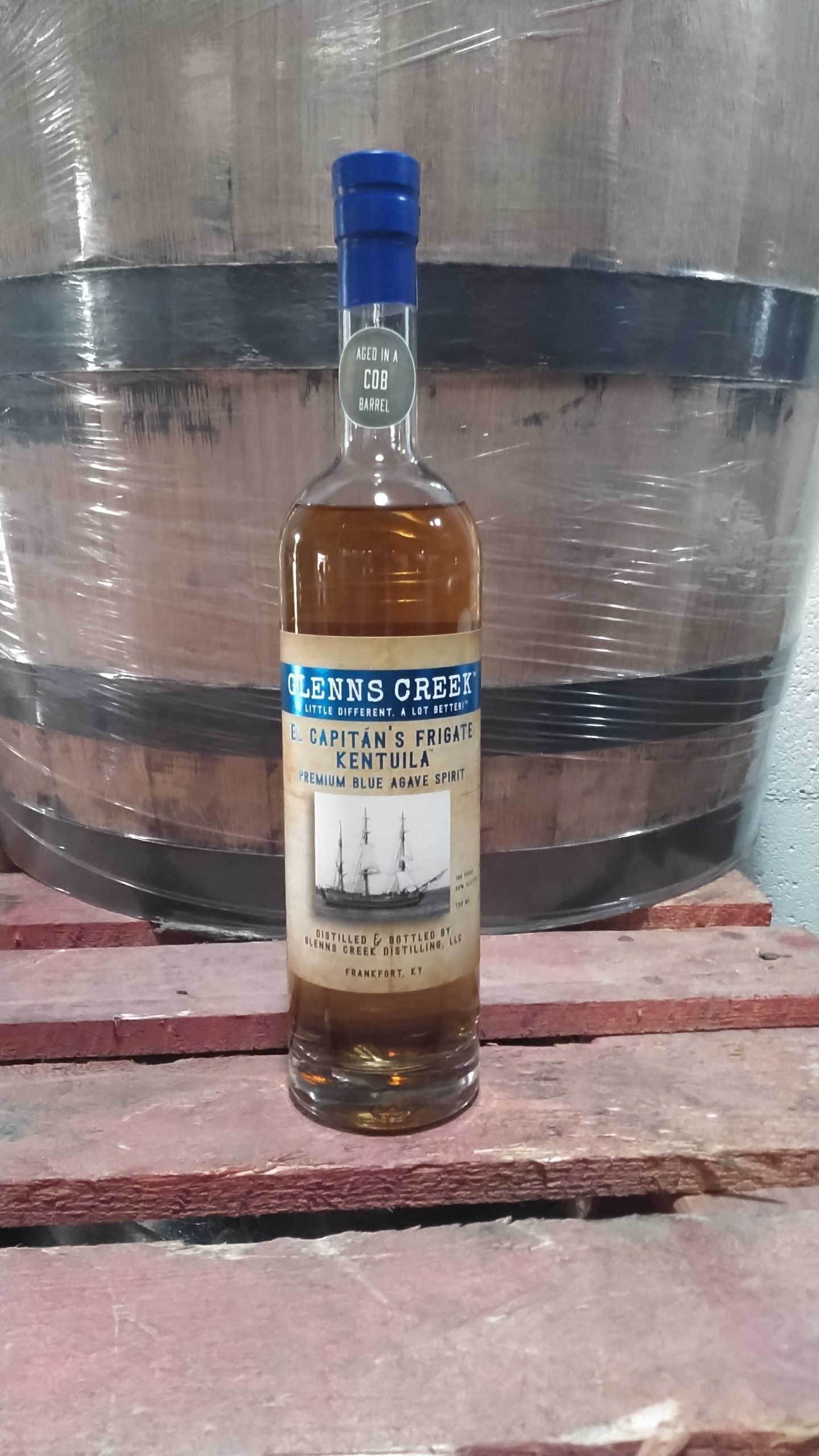 Wheat Bourbons are reported to be sweeter, so we gave the marketing department $20 big ones for a name of our wheated mash bill Bourbon and they sent back this S! I think we over paid!!

We replaced the Rye in our best selling OCD #5 Bourbon with Wheat to create this delicious single barrel Bourbon. Do I need to remind you ALL our barrels are TOASTED before the #3 char is completed?

The A-maize-ing C.O.B. Bourbon is 100% Corn Bourbon, no Rye, no Wheat, no Barley! This unique Bourbon is like watch Tom Hanks in Cast Away! In the movie you had Tom and Wilson, not much of a supporting cast. In C.O.B. Bourbon you have Corn and the barrel to provide flavors!